When Apple first showed the world the iPhone, everyone thought they would take over the mobile phone market, just as they had done with the iPod dominating the MP3 player market.  BlackBerry, however, failed to give in and took the fight to Apple. So far, they have held their own against the iPhone and increased competition from other brands. But which one is better? Which would get you spending your money on? 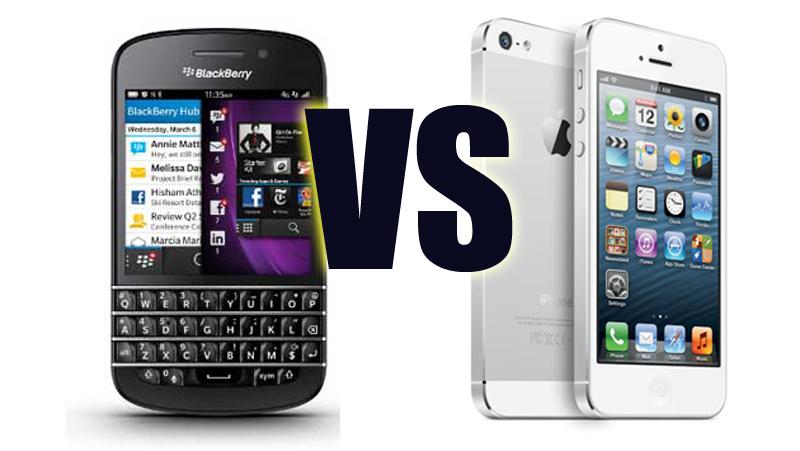 In the following article, we will compare both in several different categories whilst trying to remain unbiased. But ultimately, only you know which you prefer, which is better, the iPhone or  BlackBerry ? Phones are among the fastest developing technologies on the current market, with ‘Smart Phones’ being the latest versions. Where would we be without them! People have become so reliant on them in the modern world that we would struggle without one. So it is pretty important to find out which is the best one.

The mobile market is full of different smartphone brands for you to choose from, but two goliaths stick out from the rest. The iPhone and the  BlackBerry are the godfathers of phones that everybody wants to be seen to have. The rivalry between the two is comparable to some of the other mighty duels from recent times, such as; PC vs. Mac and PS3 vs. Xbox 360. But which of these brands is the best?

The iPhone, like the iPod & iPad, is very stylish and super easy to use! Multi-touch functionality allows you to navigate the iPhone with a simple swipe of the screen with one or two fingers. Multiple email accounts can be accessed in the included ‘Mail’ app, including Hotmail, Gmail, and Yahoo. In addition, the Safari browser allows you to surf the Internet whether you are hooked up via 3G or WiFi, which is very quick and easy to use.

Web pages can be viewed in either portrait or landscape, which can be made larger by zooming in. iTunes is fully integrated with the iPhone to let you listen to and download your favorite songs. In addition, the new iPhone 4 features a camera that shoots stunning 5-megapixel photos and full HD video!

The  BlackBerry is primarily designed for the professional; however, they target a wider audience with recent releases.  Blackberries come with a full QWERTY keyboard that makes emailing and texting really easy. Attachments from emails can easily be opened, with the additional ability to edit word and excel documents. This is perfect for the office worker that needs to finish off some work on the commute home.

The  BlackBerry has a much longer battery life than the iPhone, offering 5.5hrs of talk time and up to 27hrs of music playback. In addition, integrated social feeds allow you to bring all of your social networks, and RSS feeds together in one view so that you can see and post new updates to your Facebook and Twitter accounts. The new Torch 9800 also features a 5-megapixel camera, allowing you to snap photos and video wherever you are with integrated flash and image stabilizing technology.

A huge advantage that the iPhone has over its competitors is its access to the huge quantities of apps available in the Apple App Store. Here you will find thousands of apps and games that can be downloaded for either a small price or totally free. Many apps can be used for various purposes, such as the Amazon Kindle App to let you read all of your favorite books or the eBay app to let you buy and sell things wherever you are. In addition, there are several social networking apps available, allowing you to keep up to date with your friends whilst on the go, such as Twitter and Facebook.

BlackBerry has its own ‘ BlackBerry  App World’, which may not be as extensive as the Apple equivalent, but it has access to loads of impressive apps to make your life that little bit easier. For example, watch all the best TV that you missed over the last week on the ‘BBC player, or search for a hotel or flight on ‘Kayak.’

These prices are approximate without a monthly contract amount factored in;

Prices obviously vary from shop to shop and currency to currency, and this is without including a network rate per month. My advice would be to shop around and find the best price/contract for you!

Both sets of phones have many great features. But, ultimately, it comes down to your own personal preference. The iPhone offers the user a more casual and fun experience, with loads of games, music, and apps to entertain you. The  BlackBerry offers the user a more sophisticated experience and is particularly useful for office work. So, which do you think is better, the iPhone or  BlackBerry?