The much-anticipated sequel of the father of all first-person shooter, Wolfenstein 3D, is hard to exclude from a top-five list. The game is essentially a reboot of Wolfenstein 3D from the early 1990s but offers a modern take on the classic that still keeps up quite well with what more modern offerings have to provide. In it, players assume the role of Blazkowicz, who must escape from a Nazi stronghold and investigate the secret paranormal division around him. It is a linear FPS experience that doesn’t deviate from what players already know from the original video game. 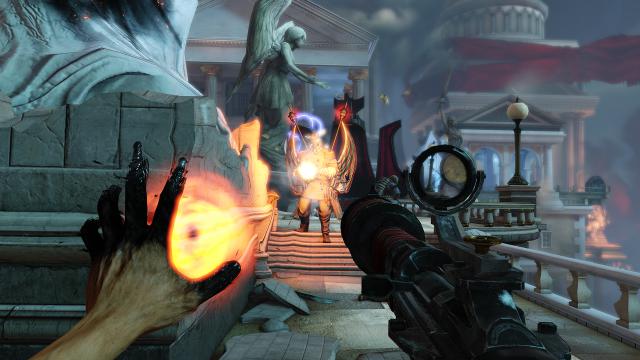 The visuals received a complete overhaul to keep up with more modern times. When played at maximum settings, which isn’t beyond the means of many computers used today, the levels become very vivid in their presentation. Although I was left with the impression that it wasn’t very “prison-like.” Instead, the levels seem rather medieval and take on a more literal meaning of “castle” in many respects. However, this does little to detract from the game’s overall experience, and it keeps to its predecessor quite well.

Overall, it’s hard to find fault with the game’s single-player mode. Still, the game truly shines on its multiplayer mode: experiences that were sorely missed in the early 1990s unless players had the technical knowledge to create IPX networks. Despite being over 10 years old, Return to Castle Wolfenstein still has a vibrant online community of dedicated players who are unlikely to disappear anytime soon!

It’s hard to think about WW2 PC games and not have Battlefield 1942 come to mind. While comparably dated like Return to Castle Wolfenstein, it’s a game that’s hard to beat in the multiplayer realm due to the voluminous capacity of players who can take part in any one match. Up to 64 players can play in an individual campaign set in the Pacific Theater and Stalingrad. It’s also set apart by its well-developed vehicle system. Increasingly modern games attempt to incorporate vehicles into the gameplay experience. However, Battlefield 1942 still stands out as players have access to over 32 vehicles on the land, sea, and the air.

Given the age of the game, most modern computers released within the past few years would be able to handle Battlefield 1942 flawlessly. However, the visuals do indeed show their age nowadays. They still stand out as remarkable for the time of the game but are losing their appeal as time goes on. Yes, it’s understandable that an 11-year-old game would do this, but visuals certainly aren’t what keep players involved in the game. I’d argue it’s the sheer capacity of players per match that makes it one of the unique WW2 games on the PC today.

If players are into full-scale combat, then this is a game that’s hard to beat. It’s by no means the best WW2 game available for the PC today, but it has stood the test of time and is still widely enjoyed by players, much like Return to Castle Wolfenstein.

What WW2 would PC games list be complete without mentioning the start of what later became one of the most successful war-based franchises in gaming history? Like Battlefield 1942, Call of Duty is hectic in its experience and provides an unmatched intensity that’s unrivaled in today’s gaming scene. However, it also incorporates a great deal of historical accuracy: many of the best WW2 games choose to neglect, especially within the FPS genre. In it, players control numerous American and British soldiers who work their way through various campaigns during the Second World War. This was all done with sensitivity to the time period, so players won’t find themselves using ray guns or other futuristic weaponry in this game.

When this game was released ten years ago, its visuals were unlike anything on the market and rivaled some of the most hardware-intensive games on the most powerful console at the time, which was the Nintendo 64. However, that’s not to say the game was without fault. My test rig did come across some aliased features, but it isn’t easy to pin down the source. It could very well be a driver incompatibility given the game’s age against my more modern hardware.

It’s still hard to go wrong with the original Call of Duty. Much of the community have moved onto more recent COD games, like Modern Warfare and Black Ops, but there’s still a very active community who play the original game. Should it ever disappear, then the single-player mode is certainly worth the experience!

For some reason, this game is often confused with Battlefield 1942. Perhaps the name “Battlefield” confuses some players into believing they’re the same game, but they are most certainly not! Battlefield Heroes is best described as what would happen if Team Fortress 2 was involved in the Second World War. In it, players side with either the Nationals (Axis) or Royals (Allies) and attempt to obliterate one another in a comical firefight that’s very cartoon-like in its presentation. I think the more lighthearted nature of the game keeps so many players involved in the community, but there are also traces of historical accuracy to keep purists amused.

It’s hard to find fault with the visuals. Yes, they’re very laid back compared to Call of Duty, but I believe this was the developer’s intention with the game. There’s certainly a comedic vibe to the entire experience that kept me engaged throughout the time I played the game.

Perhaps the only fault I can find with each gameplay session, regardless of the chosen map or opponents, caused me to be disconnected from the Internet. I’m not entirely sure what was happening, but it has affected two different routers connecting to two different ISPs. If this issue didn’t exist, I’d have no problem putting it in the first place, but it is a major bug with the game that holds back an otherwise top-tier contender.

Yes, Call of Duty is making another appearance in the best-of list with this title, which is the most recent Call of Duty game for the PC. After a slew of releases focused on more modern military conflicts, Activision reverted to its roots with World at War and put players in the Pacific Theater and Eastern Front operations within the Second World War. The experience holds to its predecessors in that it’s very chaotic throughout the single-player mode and features an impressive multiplayer experience to boot.

Visually, World at War is nothing short of a masterpiece. The stunningly detailed in-game graphics are complimented by exceedingly spectacular cinematic cutscenes that accent the player’s progress throughout the game. Movement is fluid, responsive, and, I dare say, lifelike in many instances. Of course, this can be speculative as my test rig could play this game at very high settings. The experience may differ at lower settings, which may require some older systems not purpose-built for gaming.

It would be hard for me to consider anything besides World at War to be the best FPS WW2 game. It is currently unmatched in the gaming world in terms of its strengths and is likely to hold this distinction for quite some time as developers seemingly shy away from the WW2 genre on the PC. Regardless, I would be happy to make this my go-to WW2 game for quite a while.