The new Nokia N8 is gearing up to take on the mobile phone market and will be released in a range of different color schemes, including the sleek Nokia N8 Black edition. This new Symbian phone breaks away from the normal designs of many of Nokia’s handsets and offer a new, beveled finish to what is looking like a very competent device; the new black Nokia N8 is to be joined by four other color variants in the range including a Blue, Green, Orange and Silver version.

When we say ‘breaking new ground,’ we really mean it; the Nokia N8 is the first-ever phone from the manufacturer to feature a 12-megapixel camera; now, any camera enthusiast will know that megapixels do not necessarily mean high-quality pictures but with the largest sized lens at 28mm and Carl Ziess optics onboard the new N8 will be able to capture amazing pictures. Add to this the fact that the N8 Black edition can record video in 720p HD quality and is the first phone to incorporate an HDMI socket allowing you to replay your recorded videos clips and captured photos on an HD TV for all to see and you can understand why the buzz around this new handset is already building. 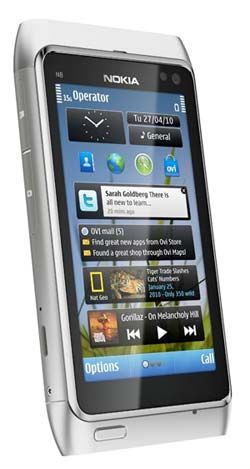 The main touch screen measures a good 3.5 inches and offers OLED technology for a bright and clear display. There is also a comprehensive multimedia player, as you would expect from the manufacturer, WiFi, HSDPA, 3.5G support, and expandable memory on top of the large 16GB internal offered. Probably best of all is that this latest Nokia phone is going to fall within most people’s budgets, coming in at £320 as a SIM Free and unlocked handset. So the new N8 is going to be hugely cheaper than rivals such as the HTC Desire and the new iPhone 4.

Another competitor to the Nokia N8 has to be the Sony Ericsson Vivaz which can also capture 720p HD video but lacks in the camera department by 4 megapixels; the HTC Legend is also a good alternative AMOLED touch screen at 3.2 inches but again falls short with a 5.0-megapixel camera.

The Black Nokia N8 is due for release in early September as a SIM Free phone; there are no confirmed release dates from the networks yet as they are all trying to secure exclusive releases for the various color schemes. However, don’t be surprised if Orange bag the exclusive rights to sell the black edition as this is their preferred exclusive handset color.