Ios – The Turkish Period And Greek War Of Independence (1821)

In 1537, Ios and some other small Cycladic islands were captured by Hairedin Barbarossa, formerly a fearsome pirate who had become a Turkish admiral. The Turks finally secured complete domination over the Cyclades in 1566, when they captured Naxos, the seat of the Duchy. The official Turkish name of los was Antza, though the new conquerors also called it Aine.

No Turkish authorities settled on the island, but Ios paid the obligatory poll tax every year. Then, disaster suddenly befell the island in 1558. Turkish pirates with 14 galleys invaded the island and plundered and devastated everything in sight before carrying the inhabitants off to the slave markets of the East. Ios remained unpopulated for 21 years until 1579 when it was settled by Albanians and those who had survived the 1558 disaster.

Albanians are also said to have settled on the island, though on a lesser scale, at the time of Markos I, to meet the need for work hands. On both occasions, the settlers were rapidly assimilated and Hellenized and did not affect the Greek character of the island. Their presence on Ios is attested only by a few names. In former times, the inhabitants of the neighboring island of Sikinos used to call the people of los tsarouchades (after tsarouchi, a shoe with a pompon worn by the Albanians). 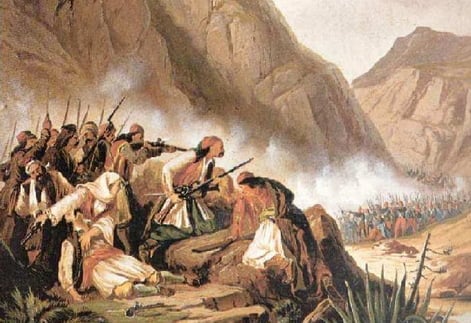 Thefamous sheltered harbor of Ios, which led the Turks to call the island Little Malta, played an important role in its history. It was the scene of an episode for which the French have every reason to be proud. In 1668, the French Temercours brothers, with two frigates and two light boats, routed the Turkish fleet of Kapudan Pasha, which consisted of 54 galleys. Three of the Turkish galleys were sunk, and 500 Turks were killed, while the victor’s losses were only 24 men.

The place where the battle took place, near the harbor of los, is now called Bourloto. A minor interruption in the Turkish occupation resulted from the war that broke under in 1770 between Russia and Turkey, in which the Russians were temporarily victorious. TAs a result, the Cyclades, including los, passed under Russian occupation for four years. The islands returned to Turkish rule, however, with the treaty of Kutchuk Kainardji in 1774.

Although los was a small, poor island, it played a notable role in the Greek struggle for liberation. The national uprising was proclaimed on los 10 May 1821, by Panayotis Amoiradakis, two months after its official proclamation in the Peloponnese. This prompt rising was naturally due to the patriotic sentiments of the islanders but may also have owed much to the circumstance that one of its sons, Sp.

Valletta had already been initiated into the “Philiki Etairia” (the core of the uprising) as early as 1818 and was indeed one of its most important members. In addition, Valetta gave great assistance to the island, both during the War of Independence and afterward. In his honor, his fellow islanders erected a bust of him in the main street of Chora.

The people of los fought the Turks on their island when the enemy attempted to make a landing and at sea in their ships. In addition, the harbor of los served as a haven and a base of operations for all the Greek freedom fighters. los was officially liberated and united with the rest of Greece on 10 March 1829, with the signing of the Treaty of London.